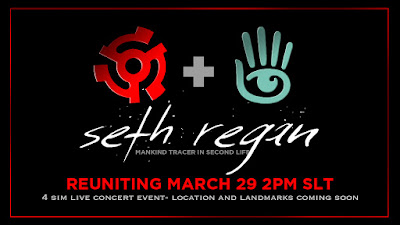 San Diego, CA: Veteran Second Life “Rock Star” Seth Regan a.k.a. Mankind Tracer is planning a return to his Second Life shows… and in a big way! On Sunday, March 29, 2020 at 2PM SLT, Seth is planning a big 4 sim live concert event backed by Linden Lab. Seth has been out of SL since his final performance back in August, 2016 when he performed a benefit concert to help raise much needed money for his dear friend and manager Kalli Birman’s children after she sadly lost her battle with cancer.

After 20 years of professional touring with various cover and originals projects, Seth discovered Second Life in 2006. He quickly rose to stardom as the most widely recognized live performer in SL. He continued his meteoric rise by introducing live video shows and holding the largest ever event in SL with his first “Peace, Love & Belief” concert which took place on 23 sims. He later blasted that record in 2011 with PLB 5 which took place across 63 sims! In 2008, Seth’s SL fan group the “Friends of Mankind” flew him out to Amsterdam to perform at what is hailed as the first ever SL meetup. They repeated it again in 2009 with over 20 countries represented at the event.

Seth has played countless benefit/charity concerts over the years, raising money to help those in need. This Return Concert will similarly be a bit of a benefit. Seth’s own mother suffers from heart disease and he will be using this concert to raise heart health awareness. Seth will be donating half of all proceeds to The American Heart Association with the other half going to help his mother. Please consider making a donation during the concert or head over to http://www.heart.org

During his time performing in Second Life, Seth has been the recipient of the most prestigious awards including "Best Live Performer", "Best Singer Songwriter", "Listener's Choice Award”, the "2011 Best of SL Lifetime Achievement Award for Outstanding Contributions to Second Life".

This is a concert event not to be missed! The “Mankind Tracer” fans are already buzzing! If you don’t know Seth’s music, you’ve been missing out. He has released 7 albums that are available on iTunes, Spotify and everywhere else. Just search his name and you’ll find his music. His live concerts have set the tone for many SL performers who would follow. One word of caution, Seth is fond of dragging people up on stage so be sure to dress to the nines in case you are one of the few he pulls up on stage.

Get familiar with Seth Regan’s music by visiting his YouTube Channel:
http://www.youtube.com/user/sgregan

Although there are 4 sims for this event, fans are urged to arrive early before the 2PM SLT scheduled concert start time. 3 sims will be set for the general public and the 4th will be used for the stage and for Seth’s group, the “Friends of Mankind” and other key VIP’s. Attendees are asked to wear Seth’s colors, red and black. Check out Seth’s own clothing line on SL Marketplace called “R:O:K Store”.

Get ready to rock!

Check out Seth Regan around the web… 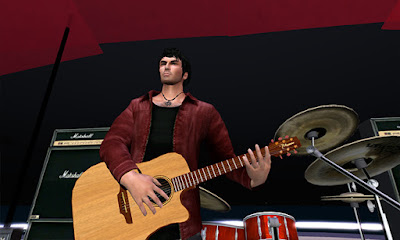 Do you enjoy writing? Do you love music? Fancy yourself in the exciting world of music journalism? Submit your entries to Dreams Riler in world or contact me through the HGMM FB page.